SNES/SFC/XLC versions only, the PS1 version of X3 is not allowed. Timer starts at "Game Start" in MMX1. Time ends when you lose control of X after the final climb in X3. Gametime is calculated as the sum of times of each game without swaps detailed on the multi game rules.

24 Mavericks rules: Time includes transistion to X2 and X3. Must play in order and all Intro stages . Time ends on last maverick hit in MMX3. A Maverick is defined as a boss whose power you get after defeating them. The X-Hunters in X2 and Bit, Byte, and Vile in X3 are not considered Mavericks. 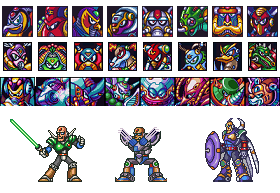 If you are missing something or don't agree with something that is displayed here. Please, contact any of these people.
Moderators: Justincredible, StarvinStruthers, Tchy